Nothing strikes more fear into my heart than flying with my children.  The very thought of it is a disincentive to traveling by air.  At least it is a disincentive to taking vacations to places where we need to fly.  But in my better moments I realize that we can’t avoid it entirely, and our favorite place to travel is a long (multi-day) car ride away.  I rarely, if ever, have that kind of time.   There will always be weddings, funerals, family gatherings and other important things that our children and we cannot and should not miss.  So, we’ve take the approach of trying to just get our children accustomed to flying instead and doing the best we can. 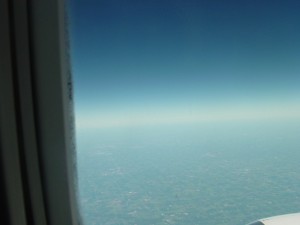 Our son took this photograph during mid-flight

We haven’t given up our right, after all, to travel and be together as a family just because one of us can’t speak and is prone to random melt downs, sudden gleeful noises and hand clapping that could bring someone back from the dead and another one of us is an eccentric individual who has interesting social interactions just about everywhere he goes, have we?  And then there’s the kids, of course.  The freedom to travel is a constitutional right. The right of air travel is also specifically codified:  “A citizen of the United States has a public right of transit through the navigable airspace.” 49 U.S.C. § 40103.

Some would say even if we have a right, we should not exercise it, because it is just inconsiderate to others.  Out of an abundant sense of inferiority and guilt, we take extraordinary measures to minimize the disruption and inconvenience to our fellow travelers, by doing such things as:

I’d posit that if you are flying on a commercial jet, you get what you get and it’s really not our problem if you can’t deal with it, particularly given everything we do above.  By the way, for those who are lucky enough to sit next to us, we routinely offer to buy people a drink (or two).  [The reaction of our neighbors to the offer of a drink shows us a lot about his or her character and gives us an idea of what our lives are going to be like for the next ___hours.]  Once, my husband tried to talk the pilot into letting our daughter sit in his lap for takeoff.  The pilot refused, telling us he “appreciated what we were dealing with and trying to do,” but he felt safety was more important.  I smiled and said, “I understand, we are just trying to prevent a lot of angry people on the plane.”  His response:  “That’s too bad for them if they don’t like it.  They are going to have just learn to cope and stick it out.”  I think that’s the right answer, and if nothing else, it bought insurance against some surly person yelling about the situation – we could just shrug and say “Sorry, the pilot said you have to sit down and cope.  Only autistic people can carry on aboard this aircraft.”

The real aspect of flying that is difficult for us – the one that makes life really hard – is that once the door closes, once we are up in the air at cruising altitude, sandwiched into that flying tin can of humanity, anything can happen, and often does.  We have had some pretty rough times in the airport as well.  Like the time our son refused to go home and went totally limp and fell on the floor of the terminal at Dulles or the time that some noise at BWI had our daughter screaming and holding her ears shut.  We’ve had good experiences and really bad experiences.  On most trips, it is some of both.  On a positive note, because I conceived of this blog post in the air, here’s a shout out to those who have been especially nice and kind:

I have two ideas to make flying a little less stressful and better for families with disabilities or special needs. My family has told me both of these are losers in terms of profitability, so I guess they will never happen.  The first is a charter airline that only flies disabled passengers.  I could just imagine what “Autism Air” might be like.  As it turns out, there is a “light” version of this concept that offers charter flights for autistic children, but only for medical travel.

Another idea is a lounge at every airport to which you could have access for a nominal fee that would allow you to have family rooms in which to relax before your flight that are sound-proofed and a “sensory” area and adaptive games that would be appealing to children with disabilities of different types.  Closed-captioned movies would be available on projection TV’s.

Maybe it would not be profitable, but given the number of autistic people in the world, it would be valuable.  I now have a “travel” tab on this Blog devoted to discussing your good and bad experiences with special needs travel (not just Autism) of all kinds.

Oh and by the way, next summer, we are taking an RV.